Today we had a little celebration on board with the kids.  Not much, just a few biscuits and snacks and Khan’s avocado that he picked off a tree in Glebe before left. We just passed the halfway mark on our passage to New Zealand. We left Sydney a week ago today. It’s already been a long trip and we still have about 550 nautical miles to go. It’s good to be finally getting closer to NZ.

Dolphins visiting – half way to NZ

Khan dreaming away some time at sea.

Sydney was great but we had been ready to leave for two or three weeks and were waiting around for a weather window to open. Unfortunately this didn’t really happen. A seemingly endless procession of ‘highs’ sitting in the mid Tasman meant easterly winds and tacking for most of the trip – not something that we wanted to do. Finally, after working with Roger Badham, a meteorologist and expert ‘router’, we decided the only way to get across ‘the ditch’ without pounding into constant headwinds was to sail south and try and get round the bottom of the high pressure systems. This means a good deal longer passage – sailing south down to about 38deg, about the same latitude as Gabo Island, before heading north east.

So far so good. We haven’t had any really strong winds, although it has all been on the beam or forward of the beam. Also lots of motoring.

A week at sea and Rachael and the kids have become real blue-water sailors. They’ve overcome any seasickness and are coping well with the routine of watches, sail changes, food and school onboard.

Jarrah and Khan doing some school work while sailing

We have been using the sat phone each day to send and receive texts from Roger who has been advising us of weather and winds and the best route to take. His last text today was to try to make a straight line for Cape Reinga, the northern most point of the north island of NZ, as there could be nasty weather coming with cyclones developing in the tropics and the possibility of them moving south by next weekend.

Hopefully we get a couple of really good days sailing over the weekend as there are light easterlies a couple of days ahead and as I write this we are motoring with virtually no wind.

Sydney was good fun, a great city to have a boat. It’s pretty fantastic being able to anchor in good shelter behind Bradley’s Head with its National Parks and walking tracks, and go for a swim with the Harbour Bridge and the Opera House for a backdrop. We also spent a fair bit of time tied to a public mooring or anchored off Manly Cove where we could easily land the dingy on the beach, walk across the Corso and go for a surf on the other side.

Manly is a full on tourist destination with lots of international backpackers enjoying the beach so there is always lots on. We watched the Aussie Pro surf and skateboard comps and went for long walks along the headland through the national park out to North Head.

Another favourite spot, especially during southerly weather, was under the Anzac Bridge anchored in Blackwattle Bay opposite the Fish Markets at the end of Glebe Point Road. Glebe is a bit ‘alternative’, a really trendy inner city suburb with lots of cafes and restaurants. A few hundred metres across the bay, we could land the dinghy at the Fish Markets, a really interesting hive of activity, even for vegetarians, and then walk for about 15 minutes into the city.

We also spent a fair bit of time at The Spit in Middle Harbour where we either took a public mooring or stayed at the d’Albora Marina during the week when it was a bit cheaper. From Middle Harbour there is great walking and running along the 10km track that links the beaches and the various foreshore national parks with Manly. 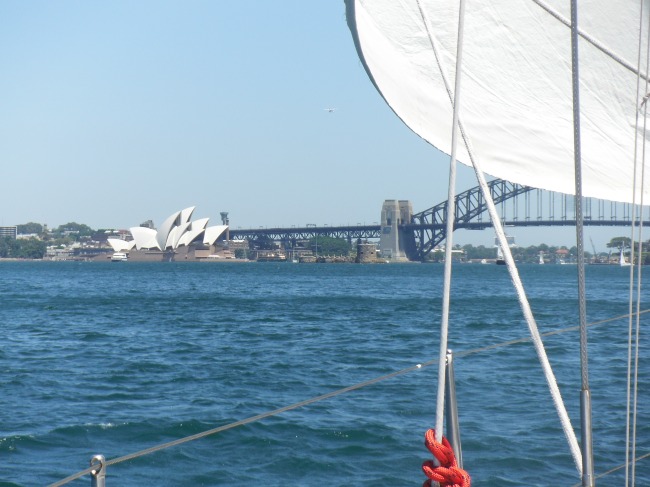 Both Jarrah and Khan have been doing really well with their school work. We have already sent off work to their teachers at the Distance Education Centre and received positive feedback. On the whole the kids have really enjoyed working through the study modules and it has been a positive experience for Rachael and myself to be so intricately engaged in their lessons. Jarrah loves the English work while Khan has a preference for the maths.

A typical day usually sees them get up and get straight into their work before breakfast. They usually do about 3 or 4 hours each day unless something comes up. We’ve had a few days at sea where it has been pretty hard for them to work with the boat bouncing around so much, but on the whole they are very adaptable and find somewhere where they can balance their work and get on with the set activities.

At the helm – Sydney (what style – look like my Dad) 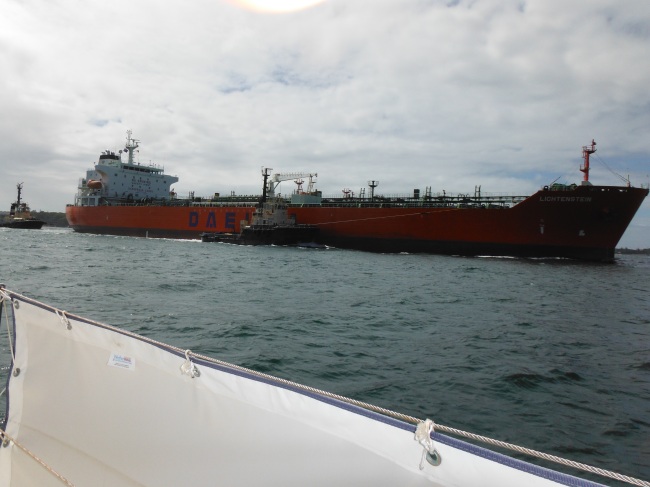 Passing a ship in Sydney

Rachael and Jarrah aglow in the sun

The boat has gone really well although we had a few repairs to do in Sydney and more preparations before leaving for NZ.

Once we arrive we plan to spend a couple of months exploring before leaving for either Tonga or Fiji around the end of April. If we can we will also try to go down and watch the Saints play in the Anzac Day game against Brisbane (I think) in Auckland.

Time to go, the wind has come up a bit and we need to stop the motor and get the boat sailing again! 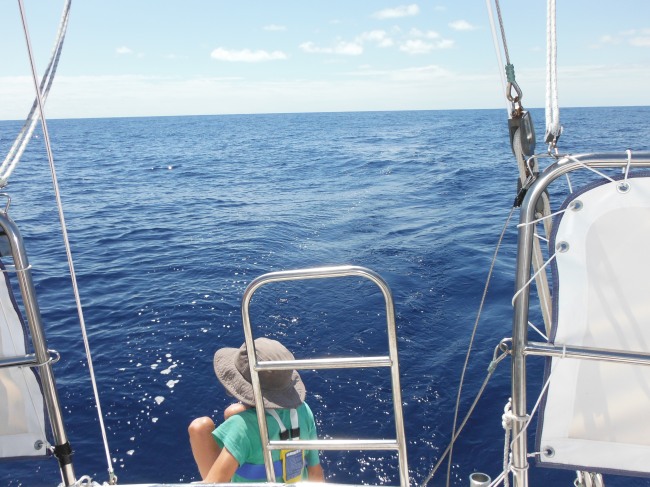 Khan harnessed on in his favorite spot.

A Calm Day on the Tasman