When I wrote my last post we were about half way across the Tasman Sea en-route to New Zealand from Australia and everything was going well. However, not long after that we received confirmation from Roger Badham, who had been helping us with weather forecasts via the satphone, that a cyclone (or at least the remnants of a cyclone) would be fairly close to Cape Reinga, the northern most point of New Zealand, at about the same time as we expected to round the Cape.

Things started to look a bit grim as we had already been at sea for over a week and were faced with three choices. We could try to beat Cyclone Lusi round the Cape, try to head for a safe harbour on New Zealand’s west coast, or  head north-east back out to sea, ride out the storm and then continue on to NZ.

Unfortunately, New Zealand’s North Island doesn’t really have any safe harbours on its west coast that can be entered in rough weather, so this quickly ruled out one of the options. Heading north-east and trying to avoid the worst of the storm at sea was also not very appealing as this would mean days of very rough weather and at least an extra week at sea.

At that stage, Roger was not completely sure of Cyclone Lusi’s track so we decided to continue towards Cape Reinga as fast as we could and see if things changed in the next day or two. The winds were fairly favourable and we put up as much sail as we could to try to give ourselves a chance of rounding the Cape before Lusi.

We logged two of our best 24 hour distances and predicted that we would be round the top of New Zealand by Wednesday morning and possibly be in Opua, a safe harbour on NZ’s north-east coast, by early Thursday morning. Roger was now also thinking that Cyclone Lusi’s effects would not become severe until sometime Thursday. We would however, have to tack into strong SE winds around the top of NZ and down to Opua. We decided to try to ‘make a run for it’ and beat Lusi down the coast.

On Tuesday evening we were just west of a very rugged and remote Cape Reinga with a very lumpy and confused sea.  We were struggling to make our required speed with the wind pretty much on the nose and strong tidal currents. We still were not sure that we would make it and that we had made the right decision. 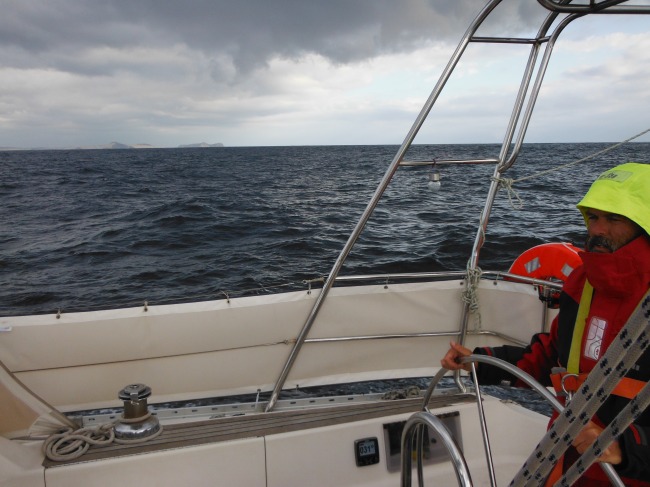 The wind gradually increased and we were forced to shorten the sails, however by about midnight, despite having to plough into some big seas, we had pretty well rounded the Cape and were able to gain more ground on a southerly tack.

As the sun rose on Wednesday morning the wind steadied at about 20 knots but was south-east and right on the nose. We had about 80 miles of tacking into strong winds and a very steep sea ahead of us but reckoned that we would make safe harbour before Lusi hit.

During Wednesday the winds increased a bit more so that we had about 20 to 25 knots most of the day. As we were still very keen to make sure we arrived in Opua as soon as possible we kept the full jib up with two reefs in the main. The southerly tacks were pretty good but the easterly tack was very uncomfortable because of the steep swell and waves. Doing about 7 to 9 knots, we were flying off the top of the waves and pounding into the troughs. The distance between the waves was very short which meant that after flying off the top of a couple of waves and burying the bow to deck level, the boat would not have time to rise above the next wave but would instead plough straight through it with lots of water coming up over the bow and running over the deck beyond the spray hood. 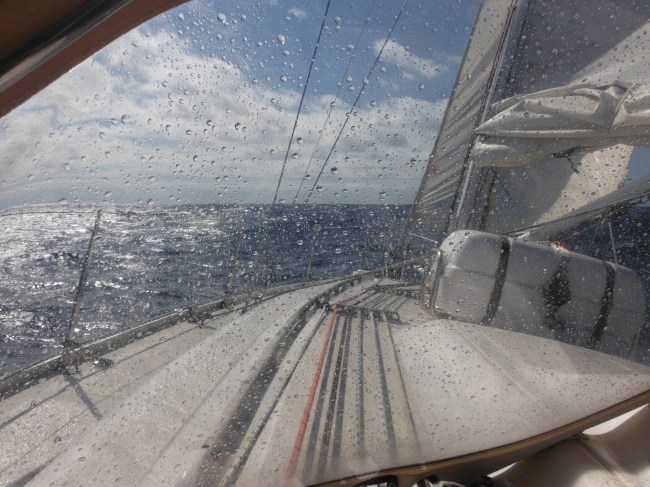 Tacking down the east coast

As we were pushing the boat so hard, lots of water was finding its way in through leaking hatches and chain plates that had previously been water tight. It was exhilarating sailing but Rachael and I were ‘dead on our feet’ and Jarrah and Khan were ‘trapped’ inside because it was so wet.

The kids are remarkably tough and are very good at coping in rough weather. They didn’t complain much even though at times they were virtually sitting on the walls or in the air when the boat flew off the top of the waves and slammed into the troughs.

It was pretty tough mentally as well as physically as the noise of the boat crashing down so heavily kept us wondering whether the hull and rig would hold up.

By late Wednesday afternoon we knew that we had made it and beaten Lusi even though we didn’t tie up at the Custom’s wharf until about 1am Thursday morning. Although very tired we had a little celebration with the kids after having crossed the Tasman and been at sea for eleven and a half days. 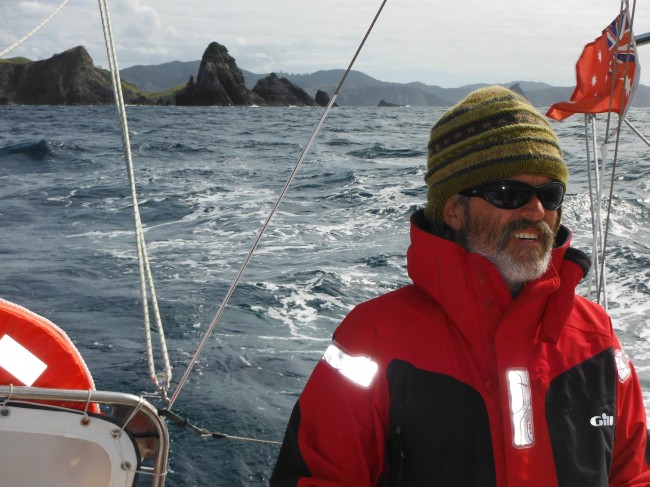 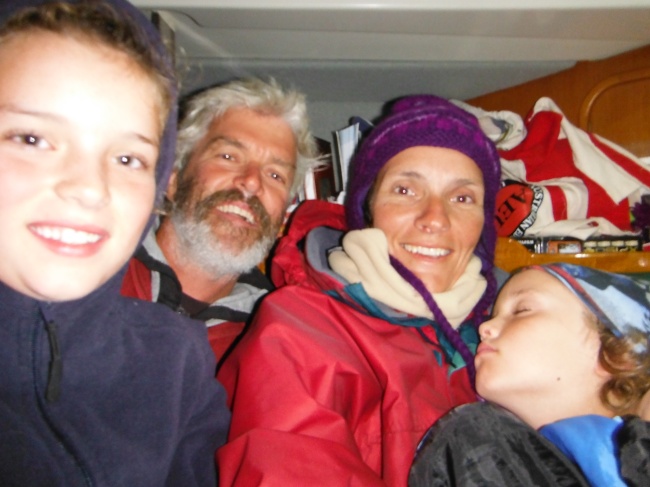 After clearing Custom’s and undergoing a quarantine check in the morning we organised a berth in the marina and began preparing for the full force of the storm which was big news in New Zealand where people all across the north island were being warned to tie everything down and prepare for winds up to 120 kilometres per hour.

When Lusi eventually hit Opua we had winds of around 55 knots and stormy weather for two or three days. The waves in the bay, where there is little fetch, were big enough to challenge moorings. A couple of yachts had sails torn to shreds when they came loose during the storm.  The wind would have been stronger out at sea and it would have been a big challenge for us to ride it out. We were, to say the least, very grateful to have made it to Opua before Lusi really hit! 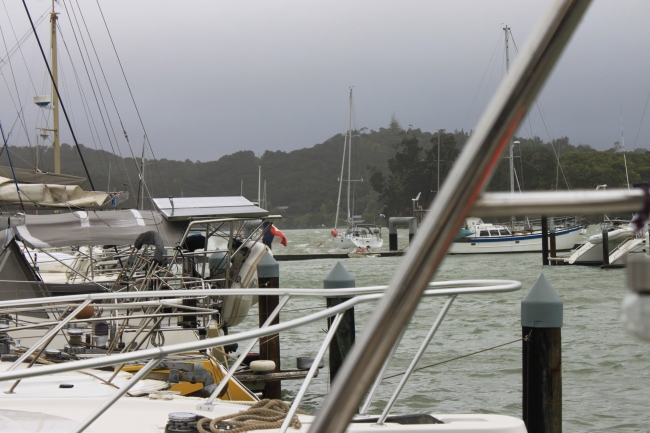 Looking through the marina at Opua on day 2 of Lusi

It took us a couple of days to dry everything out, catch up on sleep and prepare the boat for some cruising round the Bay of Islands and the Hauraki Gulf. 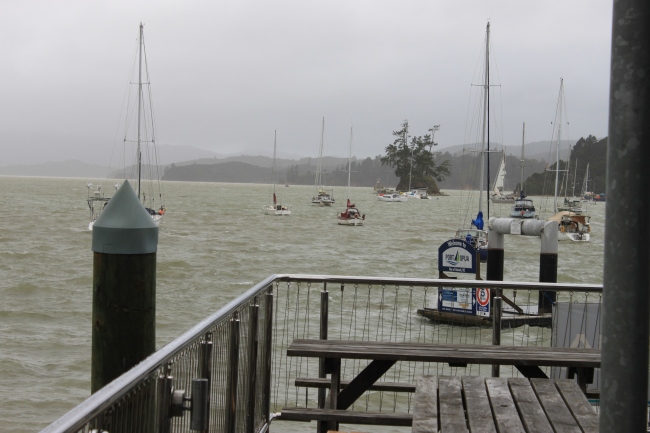 After the worst of the storm in Opua

As I write this, it is now a couple of weeks since we arrived in NZ and we are motor-sailing to Barrier Island north of Auckland in the Hauraki Gulf. It’s a beautiful sunny day with light southerly winds and a calm sea. The NZ met service predict that the good weather will continue for most of  next week – so life is looking very good!