Hi it’s Khan the Animal Reporter for the blog.

Me swinging on one of the many cool tree swings at Paradise Beach, Bay of Islands. NZ.

We are finally in New Zealand where the dancing seagulls are.  They stand in a muddy puddle and then they start to do a bit of tap dancing.  They are trying to find food.  It has been so, so good in NZ where the seagulls are.  Now I will tell you about the sea slug and soldier crabs. 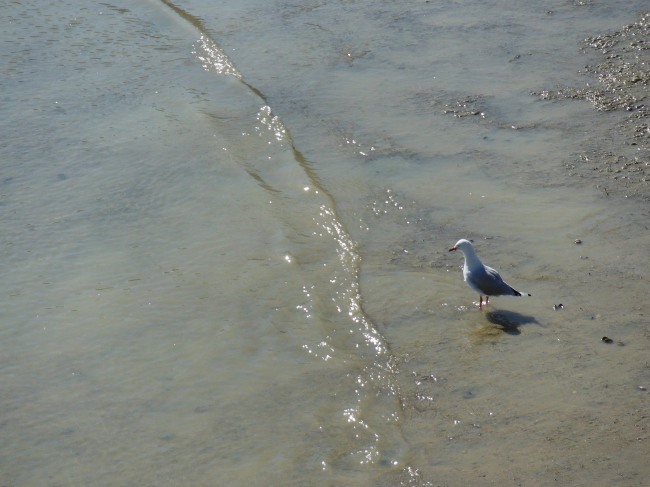 Dancing Seagull. It is a bit hard to show him actually dancing, but his legs were going up and down, up and down so fast, stirring up insects for him to eat.

Today, Saturday the 22 of March we were walking on the rocks, when I said “Dad what’s this” he thought it was an octopus but we realised it was a sea slug dying.  We tried to find something to pick it up with.  We found a container and a stick.  We scooped it up on to the stick with the container and Dad put it in the water.  He just whooshed back up on the beach, so Dad picked it back up and put it back in the water.  Luckily it swam away.  Then we went to a rock pool and watched the soldier crabs fight over something in a shell.  There were 2 big crabs fighting over the shell when another crab started to fight.  The crabs lived in all different shaped shells.

On a walk from Paradise Bay.  Bay of Islands. NZ. 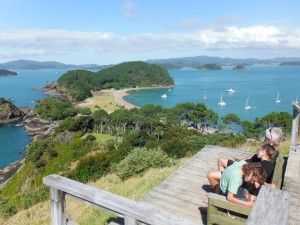 Roberton Island, Bay of Islands.  where Jarrah and I collected lots of shells to make necklaces and decorations for our shop.