A Report about Beche De Mer

by Khan: Animal Reporter for the blog.

A beche de mer is a type of sea slug. In English it is called sea cucumber and in Indonesian it is called trepang.

Beche de mer live next to or on the coral reef. You can find them at all depths. They come in all different colours and patterns. Beche de mer crawl along the sand like a caterpillar. They eat plankton and rotting organic matter. Beche de mer are worth between 4 and 100 Fiji dollars. The expensive beche der mer can only be found at night. That is because it somehow shrinks during the day.

In Fiji the villagers collect beche de mer to sell to the Chinese.

The villagers dive down to the beche de mer and pick them up with their hands or they hand spear them. The beche de mer can sometimes be so deep that you have to hold your breath for a long time to catch it and get back up to the surface. Sometimes the villagers have to swim down to 30 metres.

In some places of Fiji there are not many beche de mer left because they have been fished out. The beche de mer play an important role in the ecosystem. If we over fish the beche de mer we will have nothing to clean the ocean floor and the water will get more dirty. That could cause some coral to die. Besides that they are a beautiful animal to look at when you go diving. 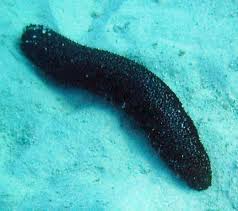