Hello..Long time no blog!
We’ve been having an excellent time in Vanuatu over the past seven plus weeks. We’ve had many days sailing and exploring up the chain of islands as well as time feeling a wee bit weary and in need of a holiday!?

Vanuatu: Aneityum to Efatē
We arrived at Aneityum Island, Vanuatu’s most southern island, on 29th August after a 3 ½day passage from Fiji (see Justin’s blog entry for passage details). We arrived and anchored in the dark and woke to brilliant blue waters, palm trees and a clear sunny sky and thought ‘we like this…we like this a lot’. We stayed a week anchored between the village of Anelcauhat and the small, uninhabited Mystery Island. A week of snorkelling, walking, hanging out and chatting in the village, eating Pamplemoose and exploring the mysteries of Mystery Island. Mystery Island (about a kilometre long with white sandy beaches and surrounded by reef and beautiful coral blue waters) is a cruise ship destination and in the coming months the villagers said there were cruise ship bookings of up to 11 ships per month. Each ship unloads up to 3000 people on to the island for 8 hours. No ships came whilst we were there but we were fascinated by how the influx of such numbers and money impacts for the villages of Aneityum and the expanse (and expense) of paid activities that are offered. 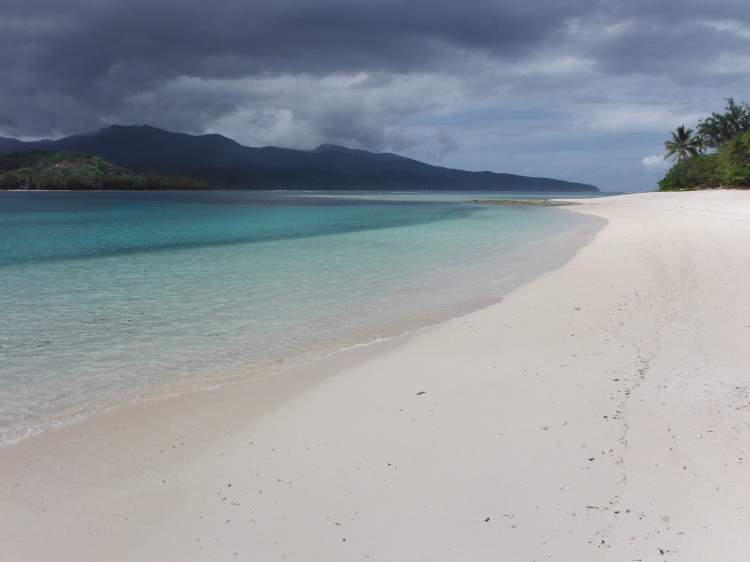 Mystery Island beach…do we have to stay here?!! 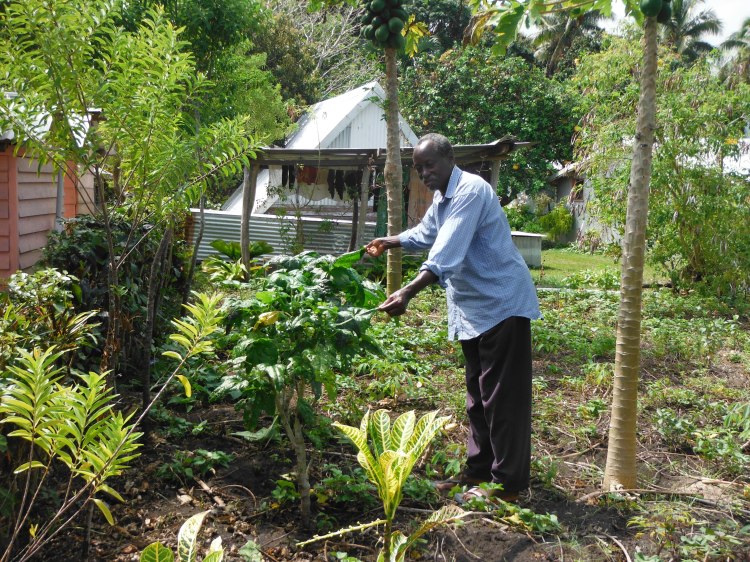 Joseph, from Kenya but living and working in Vanuatu for the past 7 years, introduced us to village life in Anelcauhat. showing us Island cabbage of which we ate lots.

Anchorage at Anelcauhat, with Mystery Island behind. 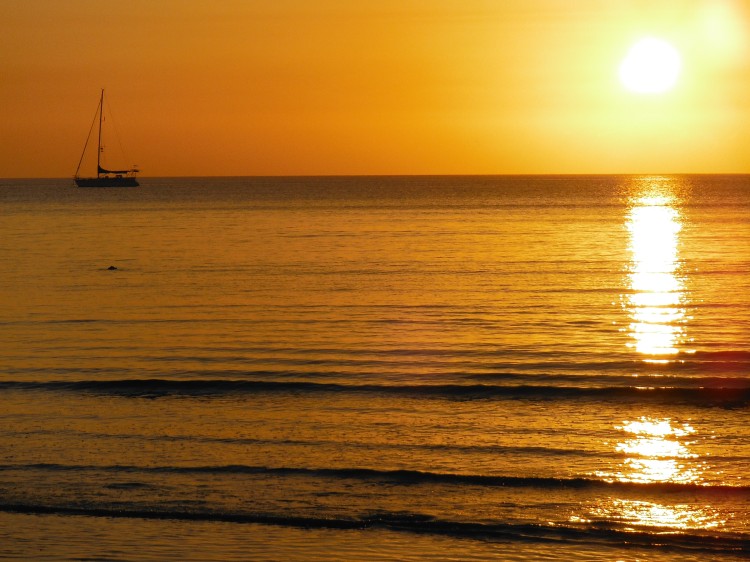 Sailing a few hours to the north of Aneityum, we anchored overnight in Itchepthav Bay. This bay had a shoreline of smooth grey boulders and a lone man (and his dog) who had decided build a house there. The next day we sailed all day to Port Resolution on the east side of Tanna. Local villagers welcomed us in dug out canoes and gave us beautiful fresh vegetables and fruit. Merriam showed us around her village and introduced us to her community. 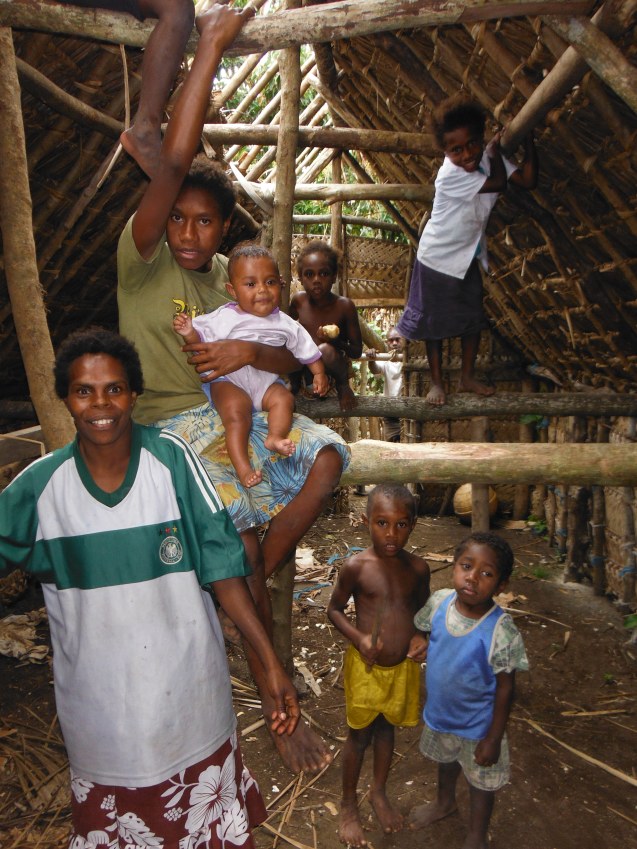 We arranged to visit the Mt Yasur volcano that cruising friends had raved about. It was awesome. In the late afternoon a group of cruisers packed into the Toyota ‘transport’ for a bumpy ride to the barren, earthy volcano base. From there we climbed up to the ashy volcano rim and were met by a chasm of volcano beneath us and deep rumbling explosions that shot molten volcanic rock high into the air above us. As the sun set and gave the volcano a back drop of black, the red hot rock explosions looked even more magnificent. I think I could have just sat there forever feeling the rumbling earth and watching the ever changing and ever impressive spectacle. 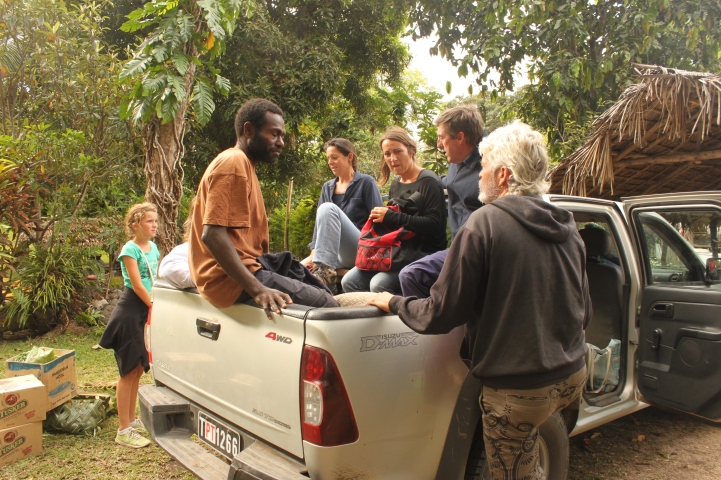 The next day we woke to rain and forecasts for unexpected north easterly winds to arrive at midnight. A north easterly swell and wind would make our Port Resolution anchorage untenable. So despite our prior plans to stay longer in the bay we, as always, needed to make decisions governed by the wind and weather. So we lifted anchor and had a very wet and rough, day long sail around to Lenakel on the west side of Tanna.

Whilst we were initially disappointed to leave an anchorage before we were ready, it opened up opportunities to explore places we would otherwise have missed. I suppose that’s the beauty of sailing in Vanuatu and Fiji, where we constantly have to make decisions about where to go and whether to stay longer or move on. Whichever choices we make, all options are good.

The anchorage at Lenakel was at times exciting (?) with big old cargo ferries docking during the night, the anchorage littered with old boat and vehicle wrecks and big surf breaking on the reef a bit too close to us. The bonus, of course, was for Justin to paddle off the back of our boat over to the reef for a surf.

The yacht anchored behind us at Lenakel…anyone for a yacht surf?

At anchor in Lenakel Harbour where big cargo ships came and went in the night. 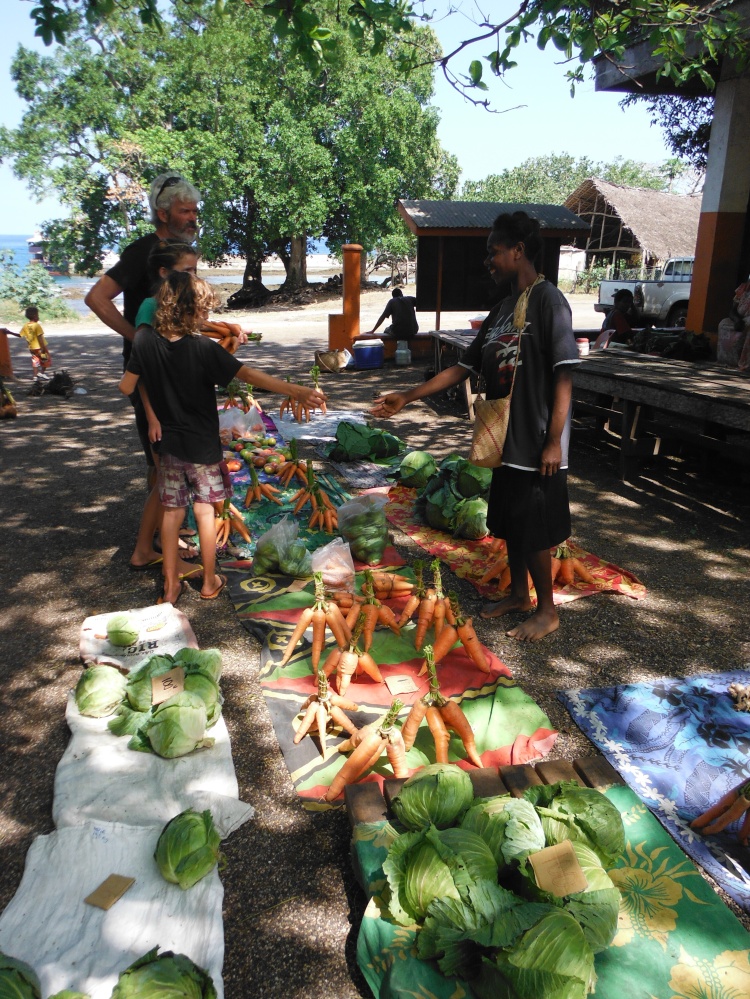 Lenakel market with its carrot displays.

Hard work on the Lenakel wharf. Dragging a bundle of Kava root for shipment.

A planted crop of Yams, one piece of root planted in each pile. Lenakel.

Justin paddling out from the boat, for a morning surf on the shallow Lenakel reef.

We day sailed to the next island, Erromongo and anchored at Dillon’s Bay. We spent about 5 days in the village. David welcomed us from his canoe, with papayas and grapefruit then took us to the nearby caves where his ancestors would shelter and to the sacred caves where past chiefs’ were laid to rest. In the village we spent time with Tonne, a teacher from the French-English school, and washed our clothes in the river. The Kava they drink in Vanuatu is processed differently to that in Fiji and all reports are that is stronger. In Fiji dried root is pounded to make a powder, in Vanuatu green root is ground and on some of the islands, including Tanna, young men/boys chew the green root then the well chewed root is spat into a pile to be soaked in water and the Kava shared. On Tanna Justin had a go at chewing the root …maybe there are some benefits of being in a male dominated culture, happy for the males to have this tradition for themselves.

Justin and Tonnie at the Dillon’s Bay Bilingual school. 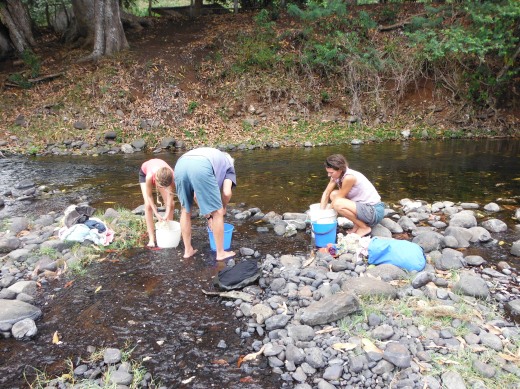 Making practical use of the Dillon’s Bay river…washing clothes 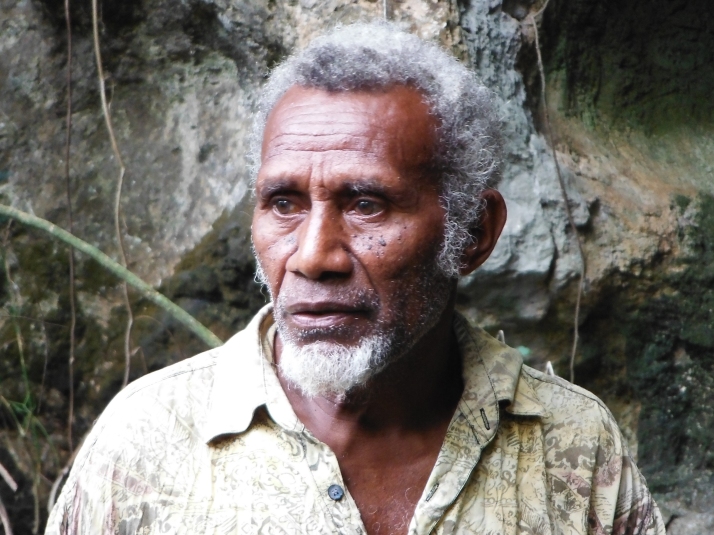 David, one of our hosts at Dillon’s Bay. 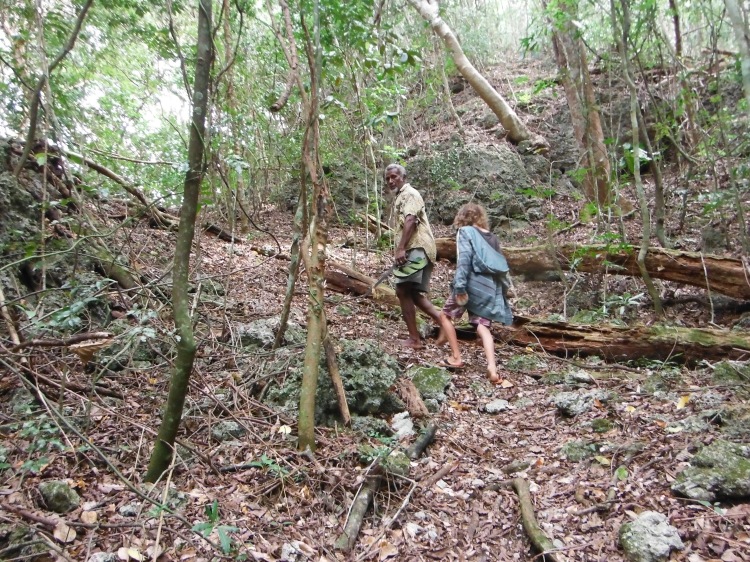 David guiding us to his family caves. 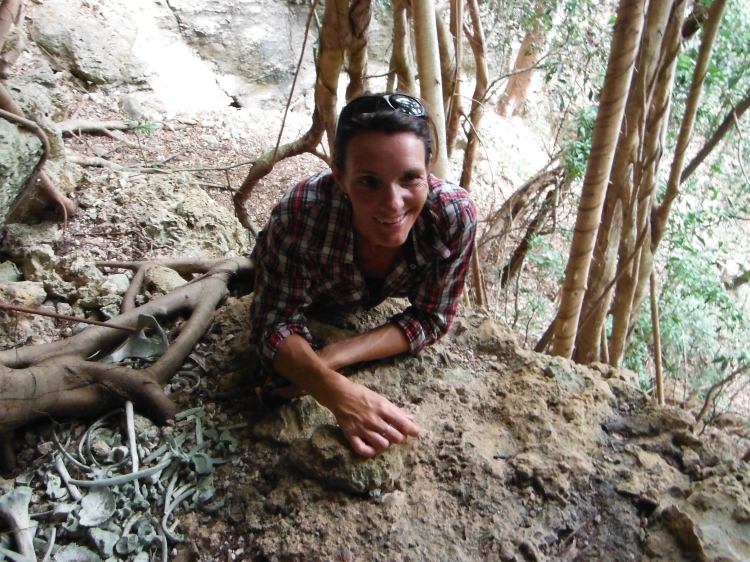 Climbing up to the Erromango caves.

Our departure from Dillon’s Bay was scheduled for 1am, based on wind and sailing time so that we would arrive before dark the next day in Vanuatu’s capital Port Vila, on the island of Efatē. In the spirit of reciprocity, after we donated some goods to raise funds for the school, the school principal organised for some fresh bread to be baked for us and instructed us we were absolutely not allowed to leave without it. So in the pitch black, windy evening, Tonne left his three small children at home and paddled out through the swell, in a borrowed dug-out canoe to deliver us warm loaves of delicious fire baked bread. What a generous send off. 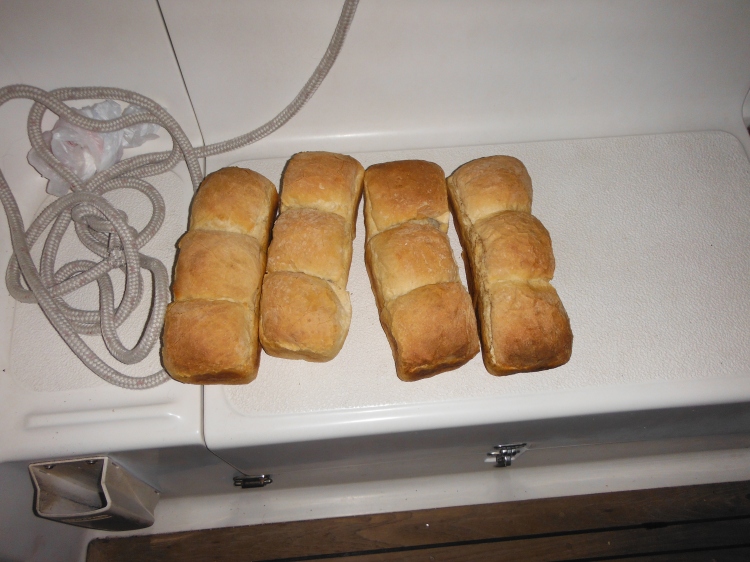 Once we picked up a secure mooring in a protected bay in Port Vila we realised we felt tired and it was really nice to just stop without having to worry about the holding of the anchor, the change in wind direction, the forecast torrential rain or even thinking about where to next. The arrival of a number of other yachts also with kids on board meant that Jarrah and Khan also didn’t want to go anywhere unless the whole kids’ gang was going. So we hung out for a few weeks in Port Vila.

Heaps of cruisers gather for a ‘Pot Luck’ dinner on shore. Port Vila.

Watching some fire dancing onshore from the back of our boat. Front row seats!

Jarrah helming as we head north up the Vanuatu chain of islands.

It was the end of September and we really had to work out where to go and wanted to be in Brisbane by the start of November. Our options were 1) to head east to Bundaberg via Huon and Chesterfield reefs in the Coral Sea, 2) sail south east to New Caledonia for a short burst of bagettes, cheese and all things French or 3) pay to extend our visas and head north for a another week or so in Vanuatu. All options had pros and cons and we couldn’t decide. Also many other cruisers were heading to the Solomon Islands and Indonesia and we were very tempted to continue sailing. Weather forecasts of 10 days of torrential downpours made Vanuatu less appealing and winds too difficult for New Caledonia, so we finally decided to head east to the reefs and QLD coast. Well that is until we woke up the next morning and all said we don’t want to go yet, and instead headed to the Immigration office to extend our visas and the market for fresh provisions. So we’re off further north up the Vanuatu chain.